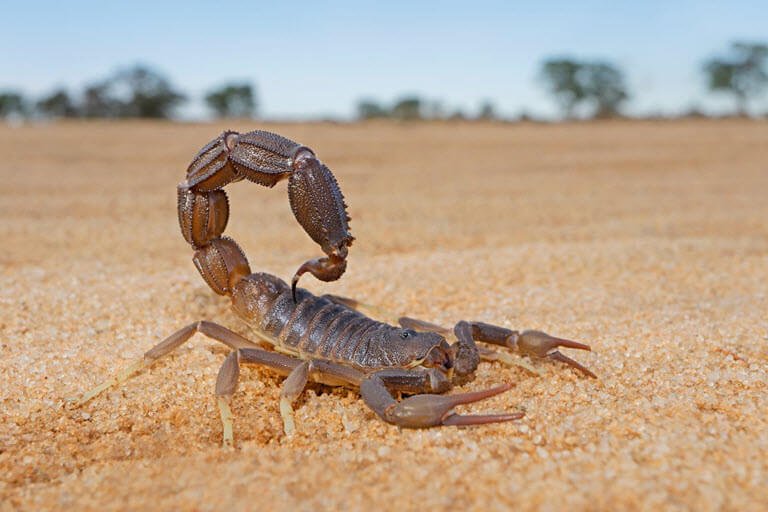 Have you ever had a bizarre dream about scorpions that didn’t make any sense to you? That dream may mean more than you think.

Whether it is a metaphor, a religious/spiritual symbol, or some type of cosmic sign from the universe, it might be worth looking into so you can gain some understanding.

Dreams have always been open to interpretation and there are several possible meanings behind the symbolism of scorpions in your dreams.

In this article, we will review the most common interpretations of various scorpion-based dreams.

Scorpion in a Dream: What Does It Mean?

Dreams are still not fully understood and are continuing to be studied today.

Scorpion Stinging Someone Else

There are a few different meanings for having a dream where a scorpion is stinging someone else.

You may be feeling out of touch with the people around you or isolating yourself from the outside world.

You may also feel trapped by others putting you down and need to re-evaluate those you surround yourself with. Either way, these dreams indicate that some changes need to be made.

Dreaming that a scorpion is chasing you could in fact be a bad omen.

It symbolizes fear and danger for the dreamer. It usually feels as if you are being hunted down by something.

This could be a warning sign that someone you know is trying to hurt you. Maybe they are planning to betray you or simply let you down without the slightest feeling of regret. This is a sign to keep your eyes open and watch out for yourself.

Be aware of your surroundings and carefully choose who you allow into your inner circle.

There are quite a few possible meanings behind dreaming of a scorpion stinging you.

When you dream of a scorpion stinging, biting, or attacking you it could be a sign that you have unconscious fears or anxiety you have to deal with.

It could also be a premonition that you may be deceived by someone that is close to you. Maybe a friend or family member stabbing you in the back or trying to sabotage the happiness you have worked so hard for.

Or it is possible that you yourself are self-sabotaging your own happiness in some way.

A more amicable meaning could simply be that you need to take a break! Step back from your day-to-day life and try to find a balance between work and tranquility. Practice self-care and putting yourself first.

Seeing black scorpions in your dreams can be a little complicated.

You are going to have to take a step back and look at what is happening in your life right now to discover which meaning truly resonates with what you are going through.

The color black is often rumored to connect the dreamer to the shadow side and reveal unconscious dangers that need to be brought to light.

Maybe a warning to set boundaries if you are under too much stress and overworking yourself for the benefit of others. Take it as a wake-up call. Slow down and find a balance.

Some consider the presence of a black scorpion in a dream to be a direct warning. You may be about to make a huge mistake in your life and this scorpion is a sign to take a step back and really think before making a big decision.

This may be an opportunity to slow down and make the right decisions for your life. However, if you make the wrong decision and fail, remember that there is always another path to success. 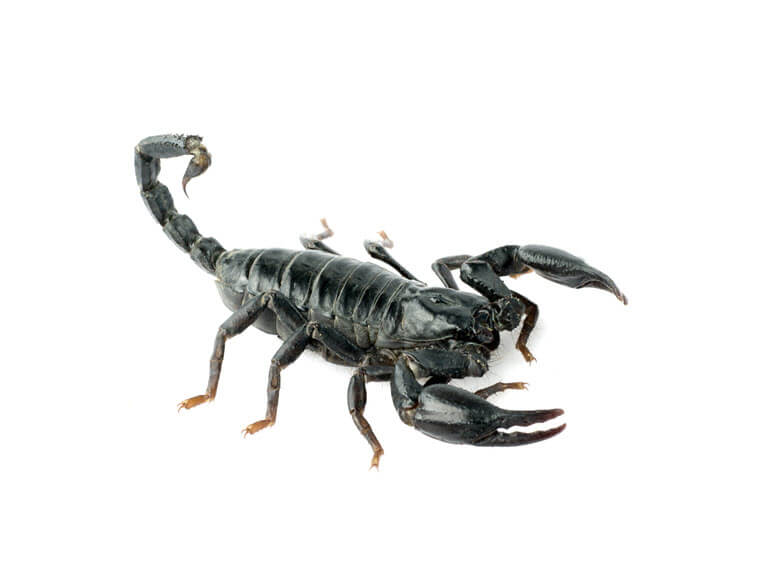 The color white is often used as a symbol of cleansing, rebirth, and purity. This is still true even when scorpions are involved.

White can also represent feelings of hope and peace. If you see a white scorpion in your dream, think of reasons you might need to feel hopeful or any positive events that may have recently taken place in your life.

If you dreamed about a white scorpion, it’s possible that something is being brought to light that you may have been ignoring or unconsciously repressed.

This is a good thing! The more we know the better. You may need to exercise caution when it comes to certain matters. Trust your intuition above all else.

A white scorpion can also simply be a sign that everything is going to be okay. If you have been going through a hard time lately, you should take this as a sign that you will overcome this.

Keep your chin up and you WILL make it through these hard times. Soon you will be relieved from the pain that you have been going through and the future will be much brighter.

Dreaming about baby scorpions can be a sign of success and new beginnings. They could very well be a good luck charm for you.

Coming into your dreams to bring a message of success and fortune. Perhaps you are going to start a new chapter in life.

These tiny scorpions could also signify some challenges you are facing in your daily life. You may be put in a position where you have to choose sides and feel some anxiety about this.

Or you could be holding some feelings inside and need someone you can open up to and share those feelings with.

Dreaming of scorpions with spiders is a sign that you have to stop running away from your problems. You may have struggles in your life that you don’t want to face, but this is only making them worse.

Learn to face these issues so that you can take control of them and rid yourself of them for good.

Scorpions and spiders might also be a sign encouraging you to connect to your feminine energy. Feminine energy does not have to clash with masculine energy.

They should exist in balance. Allow your nurturing, compassionate, and emotional self to break through.

In a biblical sense, snakes and scorpions are often referenced together to describe those who wish to remove the word of God and replace it with “poison” or false instructions.

If you are a religious person, these dreams may indicate that someone is trying to mislead you and separate you from your faith.

If you feel like someone is trying to mislead you, religious or not, you still have the power to control your own actions and not stray from your path.

Stay focused on what is important to you and everything will be alright.

Scorpions in the House

Dreaming about scorpions can be a sign of betrayal.

If you are having dreams about scorpions invading your space, you may have been betrayed by someone you consider to be a friend.

It symbolizes that your enemy is near you, either emotionally or in physical proximity.

Be cautious of the people who are around you and trust your instincts.

Killing a scorpion in your dreams is typically a positive sign. This could mean that you are killing negative parts of yourself or cutting out negative people.

You will prevail over toxic or harmful circumstances or people that are surrounding your life.

This may symbolize an internal battle going on within yourself. You may feel trapped by a situation happening in your life.

If you can overcome and kill the scorpion then this is a good sign that you will be able to defeat any problems you face and tackle them head-on.

You are ready for the challenge that awaits you!

Scorpions Crawling on You

If you are dreaming about scorpions crawling on you then you may be in distress and feel helpless.

While it can be easy to be stuck in these feelings, you must remind yourself that this suffering will come to an end as it always does. These anxieties can plague your life if you let them.

Biblical Meaning of Scorpions in Dream

Scorpions are mentioned frequently in the bible. They are used to symbolize people who wish to remove the word of God and replace it with “false instructions”.

In Luke 10:19 Jesus said, “Behold, I give unto you power to tread on serpents and scorpions, and over all the power of the enemy: and nothing shall by any means hurt you.”

This means God has given you the strength to avoid these “scorpions”. They have no power over you if your faith is strong and your beliefs are true.

Spiritual Meaning of Scorpions in Dream

The physical world teaches the reality of the spiritual world. Scorpions are used as symbols in every part of the world. They can be traced back to ancient Egypt and the Celtic people. Some even consider this invertebrate to be a bad omen.

The Native Americans did not believe that scorpions were inherently evil like many other cultures did. Instead, they believed that they danced with their victims based on their true nature.

They would often use scorpions medicinally as they believed that the poison allowed them to reach a new level of consciousness and could be used as an antidote for other deadly substances.

In the Celtic culture, many believed that scorpions were a symbol of evil. They were believed to have a connection to the underworld since they lived in crevices underground.

While most viewed scorpions as a symbol of evil some Celts saw them as a sign of divine retribution.

Scorpions in the East are both a symbol of evil and also protection. They have been used as protective symbols against negativity and evil powers.

Many eastern countries believe that the scorpion is a symbol of protection, and worship them alongside spiders, toads, and vipers.

Is It Good or Bad to Dream of Scorpions?

There are a lot of possible meanings when dreaming about scorpions. Sometimes they are bad omens or symbols of evil. Other times they can be a token of good luck.

These dreams can give us an insight into our subconscious and help us understand struggles we didn’t even know we had.

Leave a comment below if you have had a scorpion appear in your dreams (before or after reading this article)! 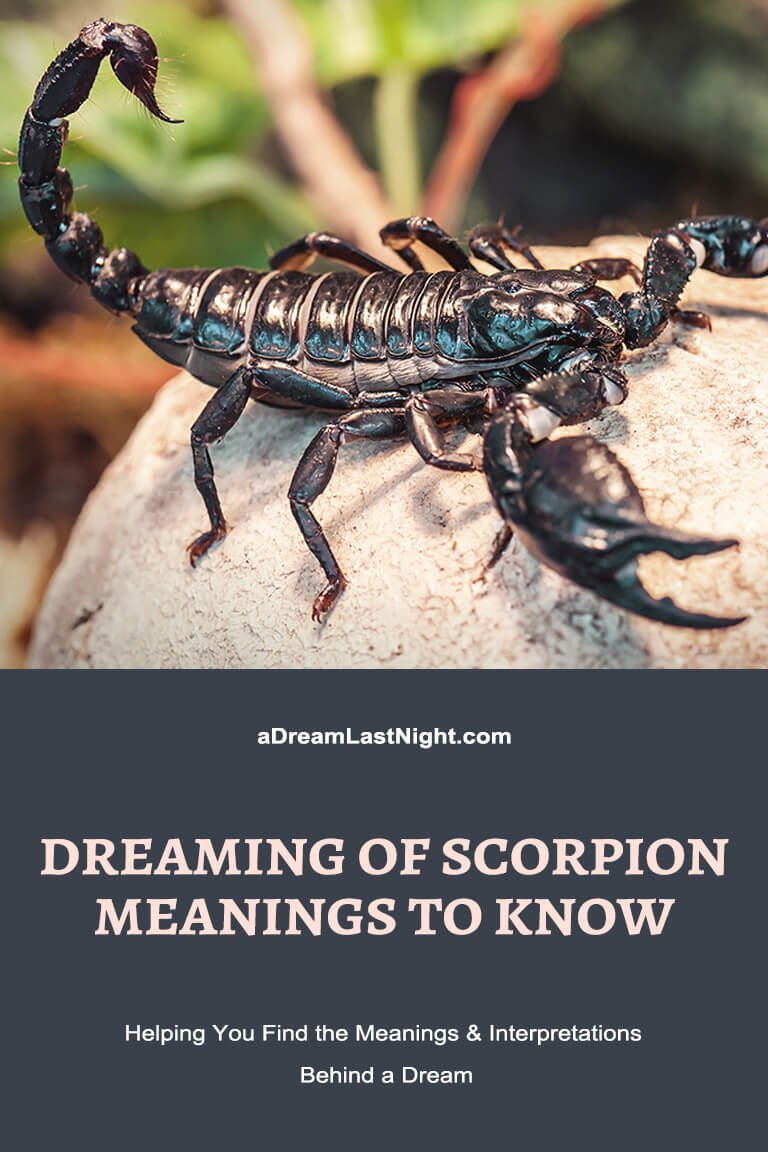 Home » Animal Dreams » Dreaming of Scorpions: What Does It Mean?
Recent Posts