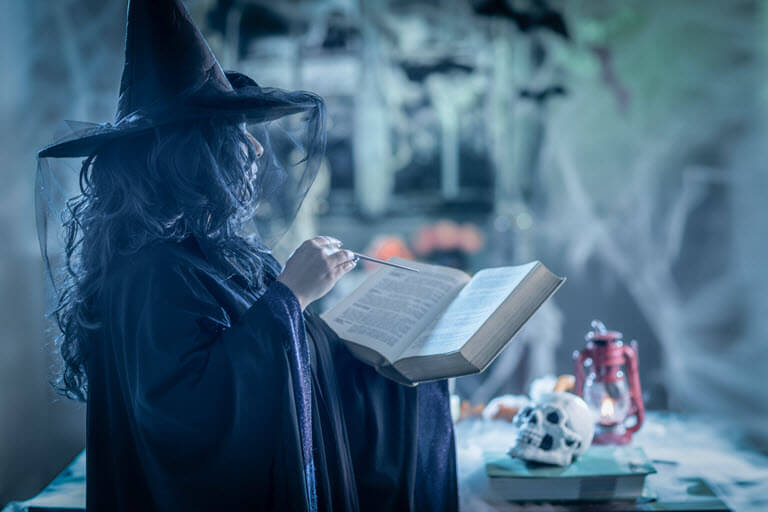 It can be frightening to dream about a witch. Especially if the witch is someone you know or if she’s attacking you.

We know that dreams are our brain’s cryptic way of processing memories and feelings, so it’s natural to wonder what dreaming of a witch could mean about your waking life.

Remember that only you can decide what meaning resonates with you, but these are some common symbolic meanings of witch dreams.

In all these cases, pay special attention to how you felt in your dream. A witch is a symbol whose meaning can change drastically depending on the larger context.

Being Chased by a Witch

A dream of being chased by a witch could mean that you feel pressured to resolve something in your life.

Being pursued in general is a common nightmare that suggests you either have something you don’t want to give up or you’re avoiding confrontation.

The fact that the person you’re fleeing from in your dream is a witch could mean that the pressure you’re feeling comes from an unwelcome or unpleasant presence in your life.

Dreaming of being a witch could mean something more positive than you’d think.

Witches were typically persecuted for having supernatural knowledge and wisdom, so if you wield magic in your dream, it follows that you might be hiding some insight within yourself.

On the other hand, if you’re horrified by your power in your dream, that would add a less favorable context.

You might want to consider what kind of persecution or negative consequences are holding you back from accepting what you know.

Killing a witch in your dream suggests you’re ready to confront something bothering you.

Witches can be agents of transformative change when they cast spells or make potions, so killing a witch might mean you’re asserting control over a recent change in your life.

Witch Talking to You

A witch talking to you in your dream can mean many different things depending on what she said and the overall context and tone.

Witches can bring knowledge and power, but people often fear this power.

Your subconscious could be using a witch symbol to tell you something you’re afraid of admitting in your waking life.

Try to remember the message and think about why you might need to hear it at this point in your life. 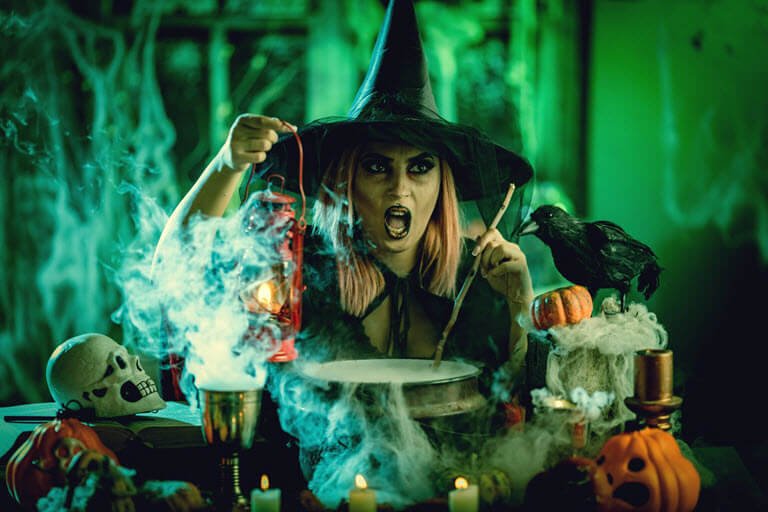 Unfortunately, a witch flying on a broom is generally considered a bad omen.

Your subconscious mind could be telling you to watch out in the coming days for any bad “gut feelings” you have about an upcoming decision or event.

If a witch attacks you in a dream, you’re probably “acting out” a feeling of being threatened or victimized in your waking life.

Your adversary appearing as a witch suggests you suspect ulterior motives or manipulation from your threat.

Remember that the threat doesn’t have to be an obviously evil person or force.

For example, maybe an outwardly well-meaning colleague is undermining your authority at work. You might dream of a witch attacking you as a way to process that feeling of a subtle threat.

Witch in Your House

A witch in your house implies that there is a threat close by in your life. If the witch is chasing you through your house, your threat might be pressuring you to act quickly.

If the witch is an intruder in your home, but she’s not attacking or chasing you, that would suggest you’re wary of a looming threat hiding in plain sight. Try to trust your intuition.

Witch Laughing in a Dream

A laughing witch in a dream is likely a bad omen.

Your subconscious suspects that you’re being manipulated in some way because the threat in your life (the witch) is amused by some negative event you don’t see coming.

Witches dancing usually means that they are performing a ritual, which could mean very different things depending on the larger context.

If you feel afraid in your dream, as if the ceremony is being performed against you, this might mean you feel powerless against circumstances beyond your control, or perhaps you’re afraid someone is hiding their true intentions.

On the other hand, if you don’t feel as though the witches are working against you, the dream could mean that you need to ask for some help from other people.

We are all more powerful when we join forces.

Dreaming of a Witch Doctor

It could mean that you hold power to resolve an issue in your life.

Alternatively, you may recognize that you need help from an unusual source for a fresh perspective on your problem. It depends on the emotional context of the dream.

Do you identify with the witch doctor, or are you afraid or hesitant to approach them?

Dreaming of defeating a witch is similar to dreaming of killing a witch, though perhaps a little less dramatic.

Because defeating a witch symbolically suggests you’re taking power from someone who could change or harm you.

Mom Being a Witch

This kind of dream is not necessarily as straightforward as it seems.

If you dream of anyone you know, including your mom, being a witch, you could feel suspicious that they are manipulating you or are otherwise not to be trusted.

At the same time, though, witches are not necessarily always symbols of evil.

If you’re confident that your gut isn’t warning you about something malicious coming from your mother, you might be dreaming of her as a witch because she’s going through a transformative period.

Or you feel she’s being unfairly persecuted (for example, the Salem witch trials).

FAQ About Witch in a Dream

Here are some commonly asked questions about dreaming of witches.

What’s the biblical meaning of a witch in a dream?

Witches in the Bible [1] are repeatedly condemned as evildoers who should never be trusted or consulted.

As far back as the Old Testament, the Witch of Endor [2] predicted King Saul’s downfall, and her prediction itself weakened him before the battle against the Philistines.

It would appear that biblical passages take a hard stance that witches are symbolically negative and threatening figures, even in dreams.

However, it’s interesting to note that their knowledge isn’t false in the Bible; it’s just dangerous to have.

What does it mean if you see something scary in your dream?

Scary dreams or nightmares can mean all sorts of things, but most often, it means you have some unresolved tension in your life.

People with mental health conditions are more likely to have recurrent nightmares (e.g., 71% of those with PTSD [3] suffer from them), so consult a doctor if these dreams bother you.

As unsettling as dreams about witches may be, they don’t always mean someone is out to get you.

Your dream might indicate you’re feeling threatened or powerless (whether you really are or not) or even that you have power you might not be recognizing.

Dream interpretation can be a great starting point for self-reflection, but sometimes you won’t be able to understand your dreams, and that’s okay.

Don’t let the witches get you down! 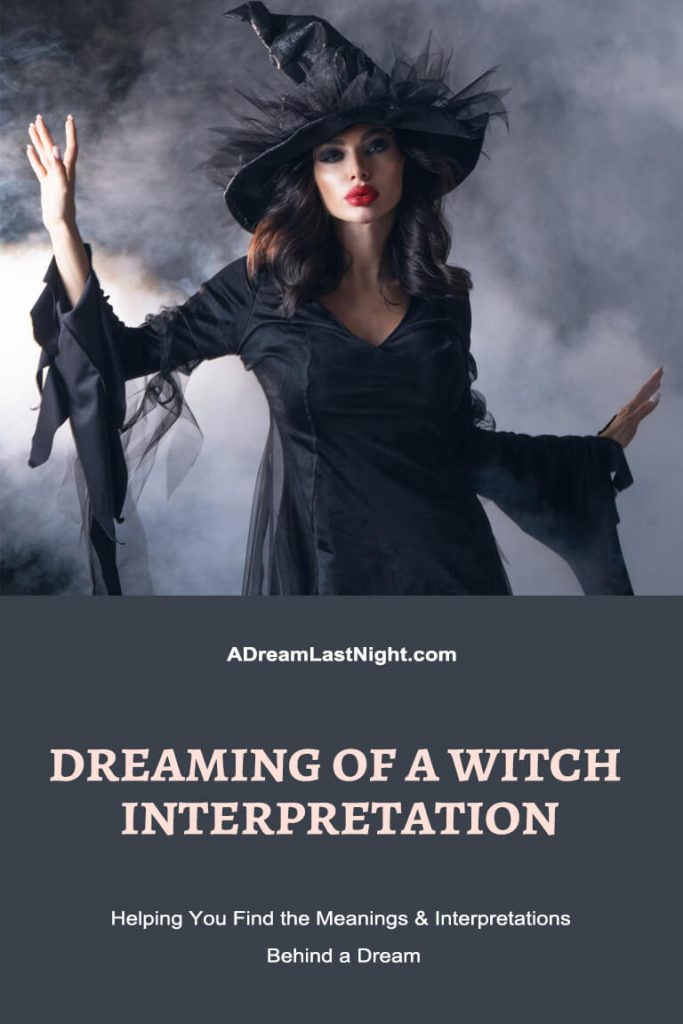 Home » People Dreams » Dreaming of a Witch: What Does it Mean?
Recent Posts