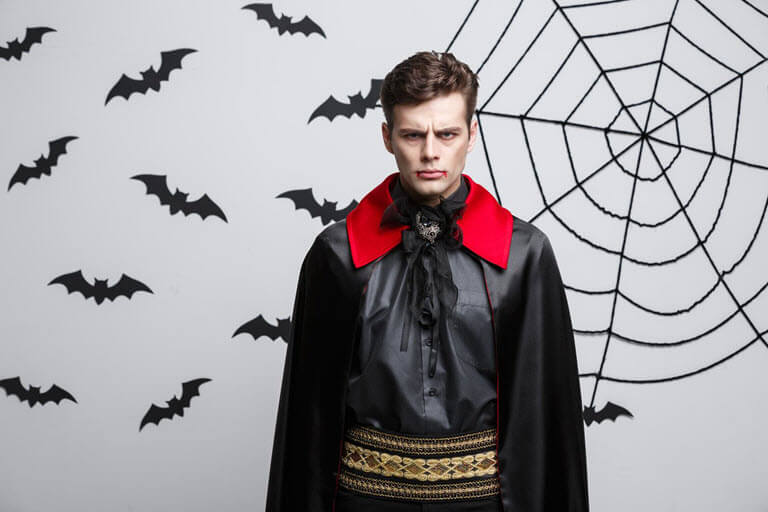 Dreams can have a significant impact on a person’s happiness. Sometimes, the meaning of a dream can add to a person’s peace of mind.

Dreaming about vampires, in particular, can be stressful, but interpreting what your dreams are trying to tell you can help lessen any worry.

Below are some tools to help you understand what dreaming of a vampire means for you.

These types of dreams are subject to several interpretations. Here are several symbols that often occur in dreams about vampires and what they mean:

This symbol indicates that someone in your family or friend group has expressed very toxic behavior lately. Their actions may be nagging at your unconscious.

When you dream about blood and vampires together, it could mean someone is metaphorically sucking the life out of you.

Someone might be asking too much from you, and you’re feeling the pressure.

Dreams of coffins and vampires can have two meanings. One interpretation is that you are putting problems to rest. It will help you overcome them!

The other interpretation is that you are burying your love life. You may have a poor outcome in a relationship.

Dreaming of a vampire’s fangs indicates an unhappy love life. You may dream of fangs if you feel unfulfilled in some way.

If people in your dreams seem terrified, it could indicate that you’re keeping a secret, and you feel guilty and scared because of it.

Dreaming about vampires and funerals together might mean that you’re not being wise with your money, and you need to keep a closer watch on your spending habits.

If you’re flirting with someone or interested in a new relationship, dreaming of silver bullets might mean they’re not the right person for you.

If you are in a committed relationship, dream bullets might indicate that you aren’t nurturing your current relationship correctly.

When there are wolves in your vampiric dreams, it suggests that you are not being very grateful. 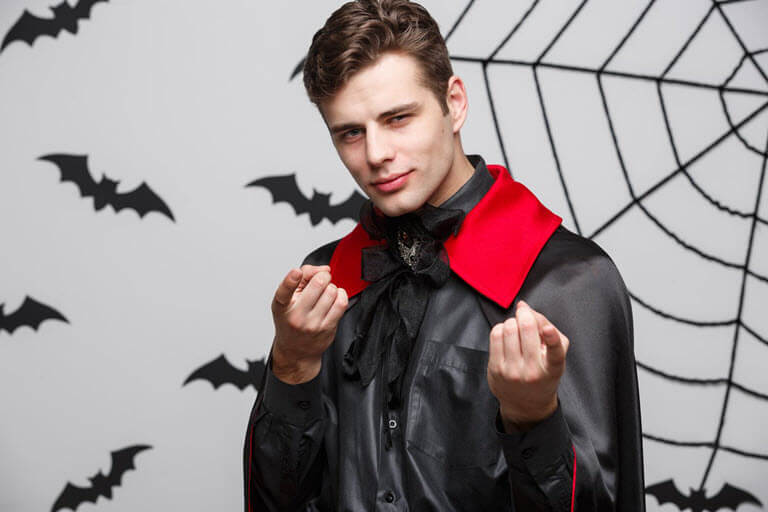 To fully understand a dream, you need more than just a few symbols to go off—the plots in your dream matter just as much as the symbols.

Below are some of the most common vampiric dream plots and what they mean.

Dream of Seeing a Vampire

Simply seeing a vampire in your dream could mean one of two things.

Either you have been scared of something lately that weighs on your mind, or you’re about to start or have just started a new relationship.

Dream of Being a Vampire

If you dream that you’re a vampire, it could be that your subconscious is telling you that you’ve been acting like one.

Have you been taking away others’ joy? Have you been excessively negative and moody to your friends or partner?

Take a look at your actions and see if there’s something you can do to be a better person.

Dream of Kissing a Vampire

Dreams of kissing a vampire indicate that you don’t feel valued by your partner. It may be a fleeting moment, or it may mean that the person you are with isn’t right or a good match for you.

Dream About Vampires Chasing You

This plotline indicates that you have been under a lot of pressure and have faced many struggles lately.

Case 1. If they are pursuing you slowly, you are still fighting against these pressures though they are getting to you.

Case 2. If the vampires are chasing you quickly, this is indicative that the stressors in your life make you feel defeated and like you want to give up.

Knowing that the vampires chasing you are trying to harm you means that someone in your life is hurting you emotionally or making you feel insecure.

Being Bitten by a Vampire

There are several meanings to being bitten by a vampire, and context is essential.

Bit You Anywhere Beside the Neck

If the vampire bit you anywhere besides the neck, it may indicate an injury or a disease in that area.

Bit Your Neck and Painful

If the vampire bit you on the neck and it was painful or scary, this indicates that someone has been draining you, controlling you, or behaving in a toxic way towards you.

It might also mean that you have been too kind lately.

Bit Your Neck and Pleasant

If the vampire bit you on the neck and it was pleasant, this could indicate that someone that you care for doesn’t care about you in return.

Being Bitten Into a Vampire

If being bitten turns you into a vampire, someone toxic is trying to turn you away from something important to you. 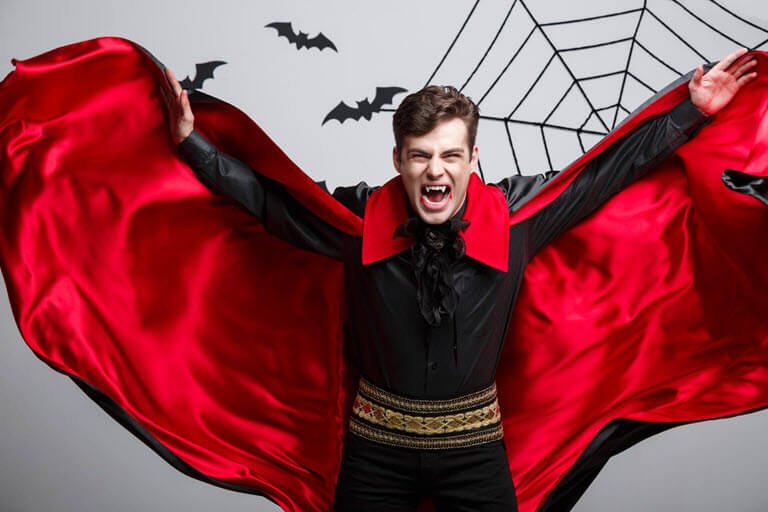 Psychological Meaning of a Vampire

Some build upon Freud’s work in psychoanalysis to extrapolate that vampires indicate sexual experiences and aggression [1].

The psychoanalytical approach to vampires suggests that they symbolize dominance and submission. They can also represent the contrasts between a man and a woman.

Others look at Carl Jung’s [2] analytic approach and say that vampires in a dream symbolize hiding one’s true self and being negative or anti-social.

The analytic approach to vampires sees them less as a symbol for sex and more as a symbol for the search for self. From this viewpoint, a vampire indicates being an outcast who doesn’t feel close to others and doesn’t know how to act normally.

Biblical Meaning of a Vampire

There are no vampires in the Bible, but it does offer insights into the symbology of vampires.

While Holy Communion prescribes drinking wine as a stand-in for the blood of Christ to receive forgiveness, several passages in the Bible say drinking any other blood is wrong.

Leviticus states [3] that drinking blood is immoral and that one who drinks blood is doomed to be an outsider.

Proverbs says that those who would leach the life out of others with fangs for teeth are a menace to society that will only ever continue to take.

Whether you look at vampires with dream analysis, a psychological viewpoint, or a Biblical stance, they aren’t welcoming creatures.

However, this dream doesn’t have to be a bad thing. After all, the first step to changing a situation is to recognize the problem.

Now that you have a better understanding of how to interpret your dream of a vampire, you can take steps to change things in your life.

Don’t Forget to Pin Us 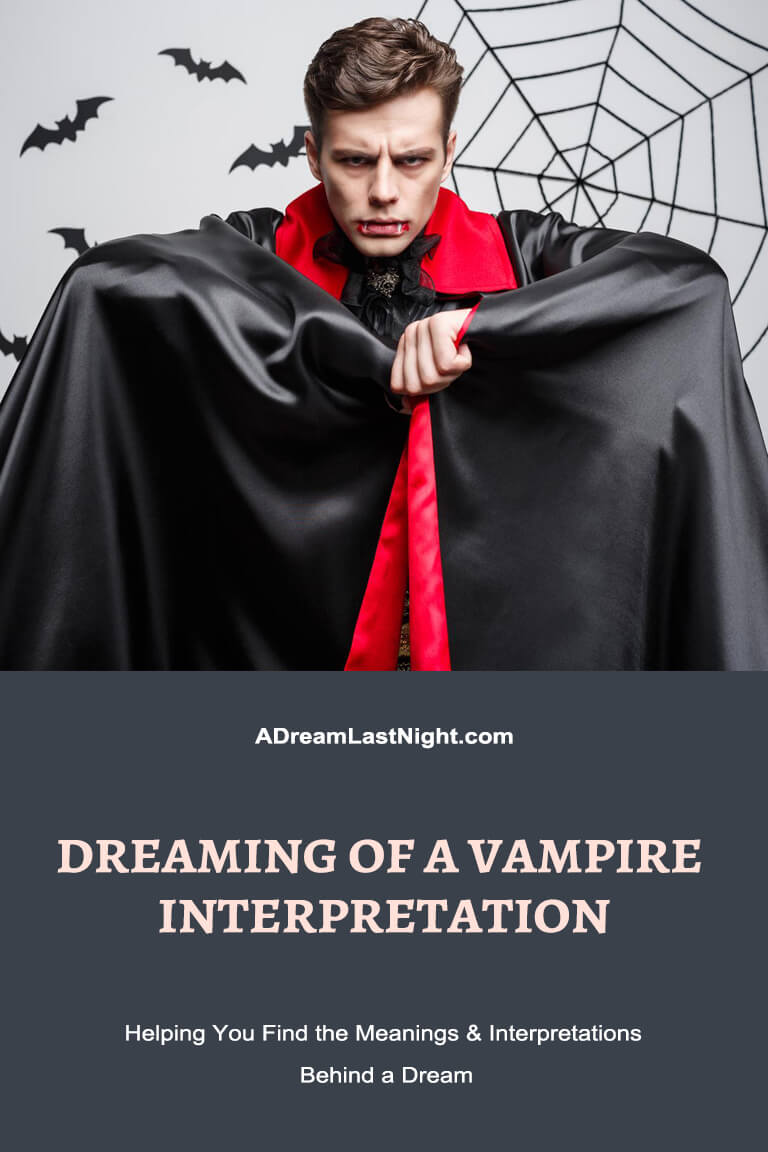 Home » Other Dreams » Dreaming of a Vampire Interpretation: Meanings Behind This
Recent Posts