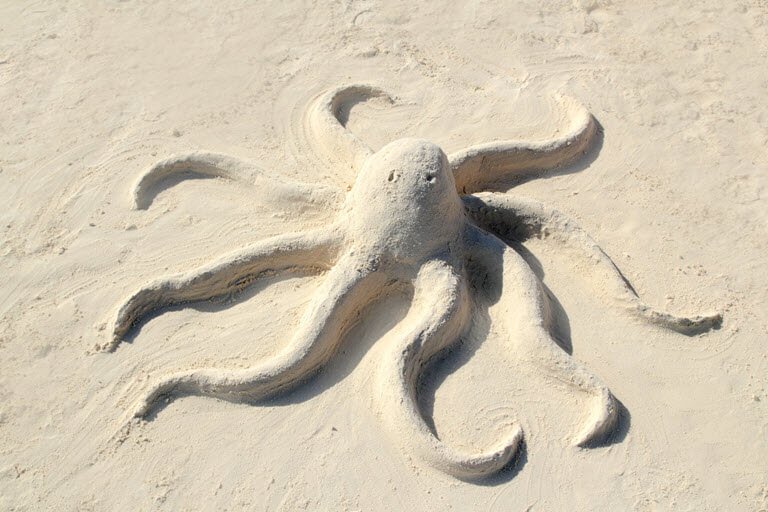 Have you ever dreamt of an octopus?

Dreaming about octopuses is not common, since other people don’t know anything about them or how they look. So, dreaming of these sea animals will make you have a lot of thoughts as to why.

In this article, we’ll give you the meaning and symbol if you dream of octopus. However, some dreams will bring good luck while others will bring bad luck. But this is not 100% true. So, you should not worry.

Also, there are beliefs that dreaming of an octopus signifies a bad omen. But, that should not be the case and you shouldn’t digest it.

The following are the true meaning of octopus dreams, symbols and interpretation.

Catching an octopus in a dream is believed to be a good omen. It symbolizes success and prosperity coming your way. This also means how victorious you’ll become. Perhaps passing exams in school or getting a job promotion in your workplace.

Dreaming of being Chased by an Octopus

Being chased by an octopus in a dream signifies a bad omen. Octopus symbolizes bitter feelings and emotions. This dream interpretation means, there’s someone who’s hindering and preventing you from achieving your life goal.

It’s also a belief that such people will try to cause chaos in your life and make it more miserable. This dream also teaches you that it’s time for a new start in life and a good balance of it.

Eating an Octopus in a Dream

Have you ever dreamt of eating an octopus? Then you shouldn’t worry since it symbolizes a good omen. This means how successful you’ll be in achieving your goals.

Dreaming of an Octopus in Water

Octopus is an interesting animal which can change its color while in water. This will help the sea animal to hide from predators or fishermen.

In this dream, water symbolizes feelings despite being an important element in most people’s dreams.

However, dreaming of an octopus signifies a good omen in your life. Therefore, seeing an octopus in this dream should make you more valuable in many talents. This means you’ll attract people around you. So, you should always be confident in showing your identity.

Also, dreaming of an octopus in water while chasing you symbolizes a bad omen. It shows you may feel oppressed with close people around you and so it’s important to be cautious with them. 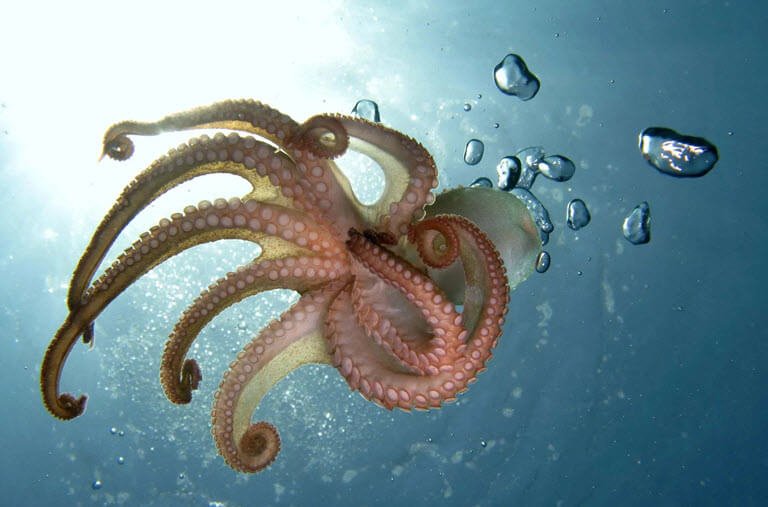 Dreaming of an Octopus Attacking You

This dream means trying to get out of a difficult situation but still getting into deeper trouble. Dreaming about an octopus attacking you symbolizes someone who won’t allow you to escape from their grip.

Also, when an octopus attacks someone else in your dream, it will signify that the person could be in danger. It will symbolize that he is under attack by some situation that has made them feel oppressed.

Dreaming About Killing an Octopus

Dreaming about killing an octopus signifies trying to eliminate something in your life. This means how sure you are in getting out of a certain situation but you can’t. Such situations like relationships could be hard to get out of despite the need to make a life change.

This dream will keep you motivated and have the urge to proceed with your plans. However, dreaming about killing an octopus symbolizes you dealing with a jealous person. This person might be pulling you back from achieving your goals. It’s not a big surprise that these people are those close to you.

A Dream of Saving an Octopus

A dream about saving an octopus signifies that you are a contributor. This means you are kind and always ready to help anyone at any time. This dream is a sign of a good omen and only emphasizes marriage.

Moreover, this dream also implies saving other people from the action of destroying themselves. It (the dream) also gives you a lesson on how you can tackle and overcome a certain problem before it attacks and consumes you.

Octopuses being intelligent sea animals always signify a good omen in most dreams according to beliefs.

Black Octopus in a Dream

According to most beliefs, black is mostly associated with bad omens. Dreaming about black octopus will mean anger and frustration due to the life stress you’re undergoing.

Moreover, this kind of dream signifies pending responsibilities which can lead to depression causing a high-stress level. It also shows a sign of how you will be in a hard situation with no one around to assist you.

It’s always known that red means danger. This dream signifies a bad omen and symbolizes a sign of danger you’ll fall into if you’re not aware. So, it’s always considered to be careful and vigilant.

This can also sound like a warning, so you must always believe in yourself. Additionally, you should have positive actions in your life for the time being. Always stay away from trouble.

Octopus is considered a sign of a good omen in most cultures.

Despite being seen as an evil creature in films, the sea creature was seen as a sex symbol in ancient Japanese tribes. They also believed that an octopus has the ability to transform itself into a human being.

Octopus was also believed to have healing powers among the Chinese tribes. These tribes also had the belief that octopus could cure whooping cough after drawing it on a piece of paper and then placing it on a stove.

However, these sea animals were used to teach people the importance of doing things slowly but surely among African cultures.

Africans believe that it is a symbol of good luck and fertility too. You’ll need to adapt to life change, thus becoming more flexible if an octopus pops up in your life.

Octopus was compared to a snail due to its slow movement. Always be observant and keen when doing something, even if it takes a long time to accomplish it. It’s also believed by most Africans that octopuses are guardians of the spirits in the sea.

It’s a clear indication that these animals are intelligent and resourceful. People with dwell on octopus beliefs tend to win in difficult situations and make ways for themselves.

Biblical Meaning about an Octopus

Octopus was considered an evil creature in the bible, so you should stay away from them. According to biblical meaning, the octopus symbolizes greed. These sea animals having eight limbs, will capture unnecessary things around them. It signifies that you’ll want more enticing things. After acquiring them, you’ll only keep them and not use them.

Octopus also symbolizes having full control of anything around you, just like an octopus. With eight limbs, these animals will tend to have full command over other creatures living in the sea.

According to biblical understanding, the animal will also symbolize things you could easily avoid. However, the bible warns about staying away from sea animals without scale. And in this case, the octopus falls into this category. This means you should avoid people or situations that will be a barrier to your success.

Also, the octopus symbolizes halting any action or habit you had. It means there will be a bad omen if you continue doing something. So, it means you should stop anything you’re doing despite it being good.

Octopuses are sea animals known for their eight long arms and round bodies. They also have big and bulging eyes with soft bodies.

The most amazing and interesting fact about octopuses is that they have three hearts and blue blood. Two hearts will help in moving blood to their gills, while the third heart will keep blood circulation throughout the body and other organs.

Is It Good or Bad to Dream of Octopus

According to this article, dreaming about an octopus can have so many biblical and spiritual meanings.

The highlighted symbols and meaning should only be a guideline and enable you to interpret them yourself.

Though, you should not worry if you had a bad dream about an octopus since the symbol will not always hurt your life. However, the octopus symbol teaches you how to survive and get out of a difficult situation. 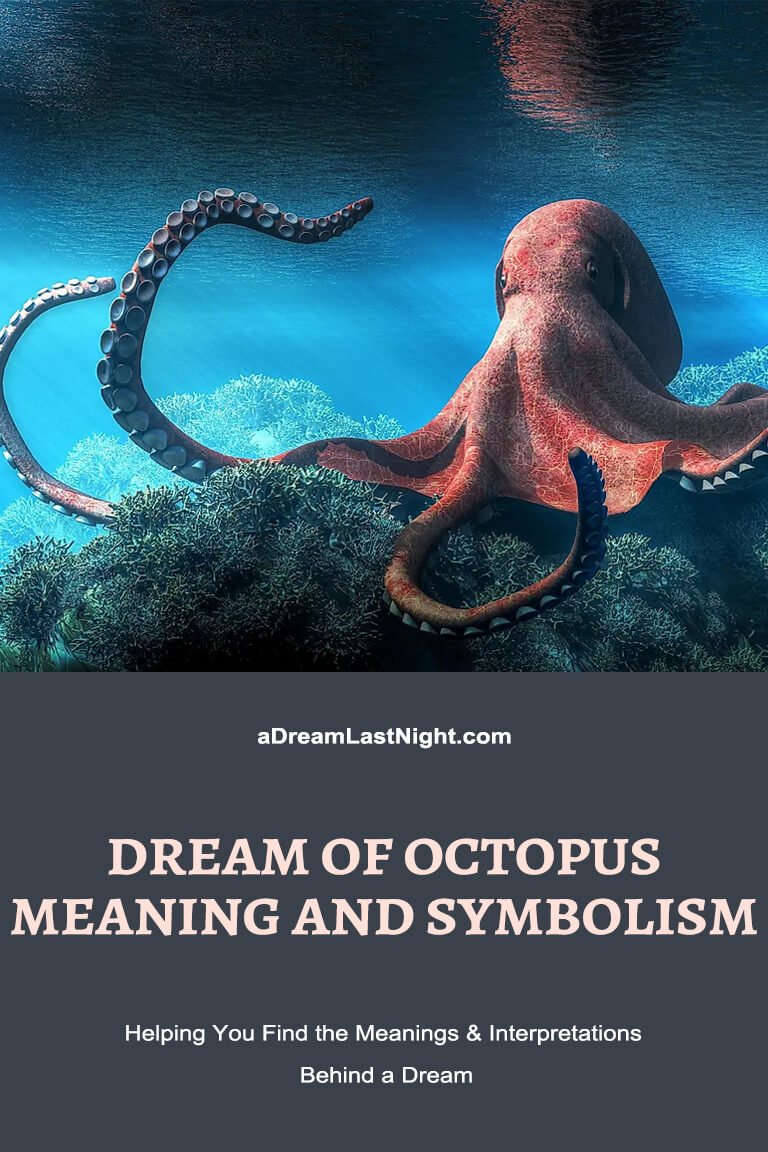 Home » Animal Dreams » What Does It Mean When You Dream of Octopus?
Recent Posts