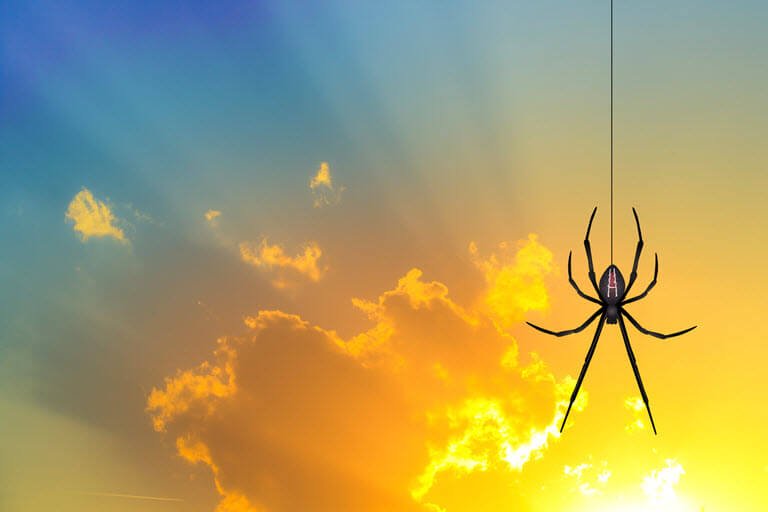 It is common for human beings’ fears to be projected from the real world into their dreams or nightmares.

Spiders are the most feared arachnids on the planet. There is a probability that dreams regarding this specific species may bear more meaning behind them.

The black widow spider is fifteen times more venomous than a rattlesnake. To worsen their reputation, they eat their males after breeding!

I wonder, should you not be worried about your black widow spider dreams?

While some truth is that black widow dreams are associated with arachnophobia, some of these dreams are connected to a deeper meaning.

The most logical explanation for black widow dreams is that they represent unresolved conflicts in your life. Let’s be clear, a poisonous species that eats its mate, what could be more conflicting than that?

Some perceive these dreams to be a sounding alarm of an unhealthy relationship in the dreamer’s life. The spider’s venom could translate to a toxic environment in which one presently suffers endangerment or physical harm to themselves.

Others could also claim that dreams of a black widow manifest the fear of death. The grim reaper will eventually come for us all. Nobody likes to think about an inescapable eventuality. 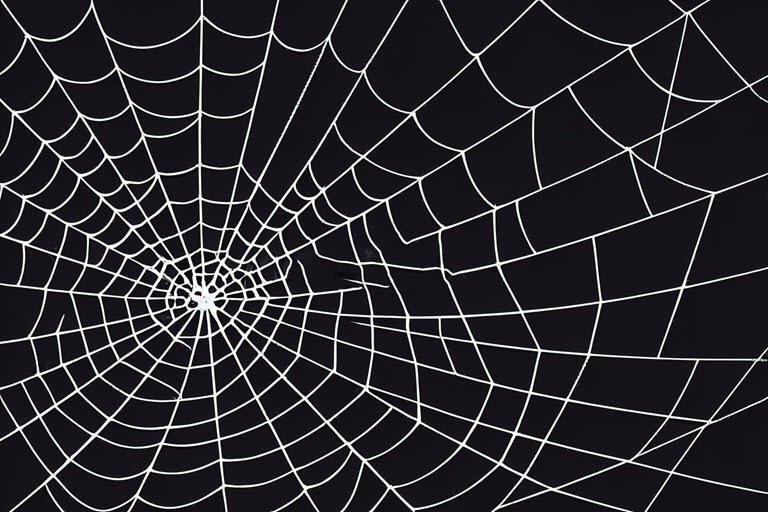 With dreams, there are countless explanations, derivations, and understandings. It all depends on the context in which one wants to understand their dream.

But these are some of the revered interpretations of black widow spider dreams.

A black widow spider is often denoted as a female harboring feelings inside. A direct correlation of the dream in your life may mean some hidden emotional issues that you are not addressing.

Black widow bite dreams have been associated with premonitions for varying human traits from chivalry to honesty, love, fear, and relations. Undoubtedly, a black widow bite foreshadows an impending emotional blockade that the dreamer must face head-on.

Like all premonitions, this dream would be a call to action. Sometimes human traits are too complex for our selves to comprehend. Through such a dream, your subconscious is crying out loud for you to deal with what your conscious self is not digesting as it should.

Dream of Killing a Black Widow

The black widow spider represents complexity. Dealing with complexity is the equivalent of clearing clutter.

Take this vivid example, if you have a knot that you want to get rid of, you either untie or cut it off. Killing a black widow spider loosely translates to clearing your emotional and mental clutter. While this symbolism may appear grotesque, it is a beacon of hope, especially if you have dealt with the emotional strain for a while.

The dreamer can therefore smile upon dreams related to killing the black widow spider. They are an array of hope and often lift the weight of strain from an individual’s subconscious.

Such dreams are only interpretable to those who already understand what the black widow spider dreams mean.

The male black spider always has an unfortunate ending. They do not survive long, as they are eaten up by the black widow soon after mating. Therefore, if your dreams are filled with black males, you have every reason to be concerned.

The black male is a symbol of timidity, cowardice, and doom. Its color, black, is often viewed as dark and cheerless.

Dreams are no different from predetermined perceptions of their color. A dream regarding a black male could likely spell impending doom or breakdown for the dreamer. It is a classic hunch, but this time, of nothing good awaiting.

It could also be that the dream is an interpretation of a real-life challenge bugging the dreamer. Maybe a sadness or a deep sense of loss. Either way, the dream represents all things negative in the specter of human traits and emotions. Dream of Spider Biting Someone Else

Most cultures correlate the black widow’s bite to danger or death. How deeply do you believe in dreams and prophecies?

In every culture, individuals have the ability to foretell things to come through dreams and visions. The person bitten by the black widow spider could be in grave danger, both physically and emotionally.

Most people tend to write of dreams as creative imaginations. However, as the adage goes, better safe than sorry. Dreams of people we know getting bit by black widow spiders are warnings that we should consider conveying to individuals.

In cultures where the black widow symbolizes death, such dreams are seen as interventions from a ‘greater power’ to prevent or prepare for a looming eventuality.

Dream of a Dead Black Widow

Without complexity, the power to make changes and start afresh is often in our hands. Thus, a dream regarding a deadly black widow symbolizes that you have nothing else holding you back.

Most people prefer blaming the status quo on a thing or person that blocks them from attaining success, happiness, and goals. Our failings are ours alone, without an object to point the finger. A dead black widow signifies that that blockade is no longer in your way.

This dream would be one of hope and encouragement. But it also poses a challenge to the person. In the face of true responsibility, some would crumble. The dead black widow dream is a test of our character and resolve.

Whether one has it in them to take matters into their own hands, it is a call to immediate action, considering all unresolved problems can no longer be blamed on a third party.

Keep Dreaming About a Black Widow

A recurring dream about a black widow can suggest apprehension and instability that has lasted too long in your life.

Most dreams tend to cease or reduce frequency once the underlying issue has been resolved. But sometimes, our conscious brushes off what the subconscious communicates through dreams. This negligence results in recurring dreams of a similar or the same nature.

If you repeatedly dream of black widow spiders, you have some baggage that needs your immediate focus.

Dreams of black widows are already frightening in the first instances. So, when they are recurring, they deprive peace of mind. As already discussed, a black widow’s dream demands attention to a toxic environment or relationship.

The deprivation of peace that comes with these dreams could also symbolize the lack of peace one is experiencing in their personal life. Such dreams could be an alert of consequences if one does not actively seek to root out the cause of their problem.

Cutting ties with the toxicity could also end the dreams, or nightmares in this case. 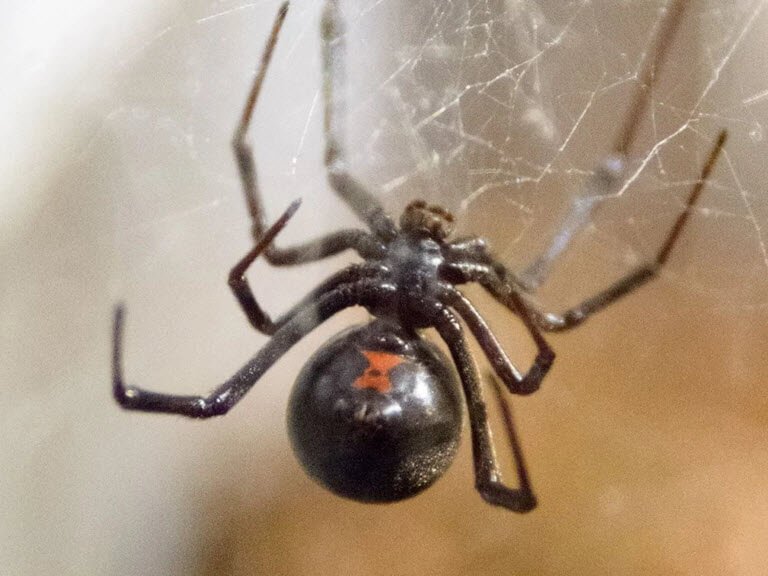 The black widow symbolizes death, gloom, and danger, and most cultures tie it down to negative human traits like fear, doubt, unhappiness, and depression. All these interpretations are derived from the arachnid’s poisonous nature.

While all this is true, the black widow is more than just a symbol of doom and destruction. George R. R. Martin quotes, ‘Chaos is not a put, it is a ladder”. Likewise, the black widow’s assumption of death and doom can be interpreted as a symbol of hope. This interpretation may seem farfetched and even appear as an over-reach, but there is a reasoning behind it.

First, the glass is always half full, not half empty. If you dream of a black widow bite, it signifies impending danger. But it also allows you to take measures to prevent harm.

Therefore, dreams are like alarm bells that ring away at the sight of danger. A fortified city has bells on its walls to warn of an incoming attack. The black widow is this alarm bells for us.

What Do Black Widows Mean Spiritually?

The black widow spider is a call to have more faith in yourself and the abilities you have created. Have you ever wondered why despite the size difference between us and the little arachnids, they still inspire fear in us?

It’s not because they are aware of their venom. The black widow’s aggression is because the spider is looking to survive. It trusts its aggression and maneuvers to protect it from human beings and animals alike.

As human beings, we often question our abilities and survival capability. Christianity, for instance, teaches we are created in the image of God and should have no doubts.

Borrowing a leaf from the tiny but lethal black widow, we must all endeavor to remain fearless and have faith in ourselves. Only this way will we survive the dangers of our world, as the black widow does.

Is It Good or Bad to Dream of Black Widow?

It may require us to take a positive perspective of this symbolism to help evade the threats we face. Through logical interpretation of dreams and reality, we can evade incidences that would have otherwise caused great emotional, spiritual, and physical damage to ourselves. 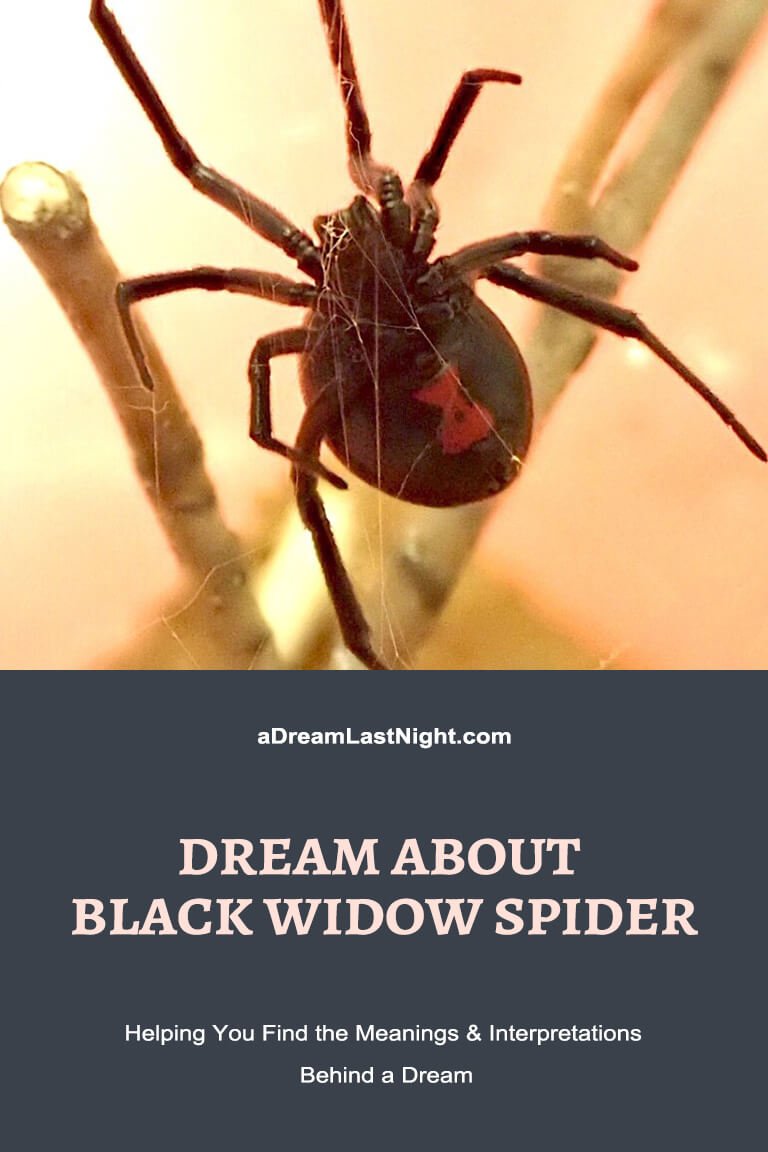