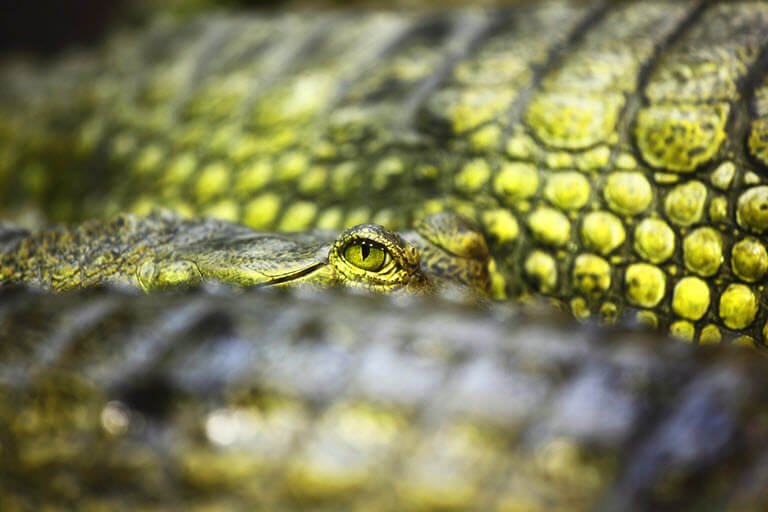 Crocodiles are fascinating reptiles. They inspire awe and fear with their giant jaws, sharp teeth, and powerful tails. Long before humans dominated life on earth, crocodiles have been lurking in the shallow waters waiting for prey for millions of years.

Throughout history, encounters with crocodiles have always ended up badly for humans. It’s no wonder then that the mere thought of a crocodile would make us uncomfortable. And when a crocodile enters our dreams, we can’t help but wonder if any good would come out of that dream.

What do Crocodile Dreams Mean for Different People?

Your dream is a highly personalized experience that your brain creates in response to certain events, emotions, or ideas that keep your mind busy during your waking hours. Even when different people dream about the same thing such as dreaming about crocodiles, the meaning and symbolism of the crocodile in each dream are quite different from one person to the next.

Crocodile dreams could be associated with hidden threats, insecurities, facing fears, being resilient when facing difficulties in life, or simply longing for an adventurous nature. Your social relationships, work environment, and health condition are also factors that can affect the meaning of a crocodile in your dream.

The following table details the possible meanings of having a crocodile dream based on various external and internal conditions.

Apart from the relationship status, health condition, or work-related anxieties, the context itself could also change the meaning of seeing a crocodile in your dream.

The crocodile doesn’t always have to be threatening to the person having the dream. Sometimes the reptile is threatening someone else or even not threatening at all but acting as a pet.

A Crocodile in Water

Crocodiles hide in the water when they’re hunting and only come to the shore to sun themselves. So if you see a crocodile in the water in your dream, that represents a threat in your life. Most likely that threat is a hidden one that you’re not aware of yet.

A Crocodile Chasing Me

A crocodile chasing you in your dream could reflect some uncontrollable anxieties and fears that you have to deal with on a daily basis.

For a reptile, a crocodile is quite fast even on land. To have a crocodile come after you could mean that you worry about a threat catching up with you and disrupting your life.

A Crocodile Attacking Someone

When a crocodile attacks someone else other than the dreamer, that often implies a guilty conscience.

The dreamer isn’t having problems but they’re causing trouble for someone in their immediate family, circle of friends, or a coworker. If something bad happens to that person, the dreamer will most likely feel responsible and will have to live with the guilt.

A Crocodile Attacking Me

A dream about a crocodile attacking you means that you feel threatened in one way or the other. The threat could target your integrity, livelihood, mental health and wellbeing, or your relationship and emotions. The source of the threat could be someone you know, the crocodile in the dream will have vivid details.

But when you have no idea where the threat is coming from, that could make you anxious and the crocodile will be blurry or mostly hidden in water or mist.

A Crocodile Entering a House

Your house is your castle where you feel safe with your family. If you see a crocodile entering your house in a dream, that symbolizes your anxiety about the safety and integrity of your house. You are worried about the future or you harbor some fear about someone in your life.

If the crocodile in the dream is entering someone else’s house, that could imply that you have a certain power or influence on the person or people who live in that house. You anticipate that you’ll play a major role in their life and not necessarily for their own good.

To kill a crocodile in your dreams is the ultimate representation of self-confidence and sense of achievement. It means that you are well aware of the obstacles in your way and that you have accepted them and are working to overcome them.

In this dream, the crocodile is everything and everyone standing in your way but you’re not intimidated and you see your way clear to achieving your goals. 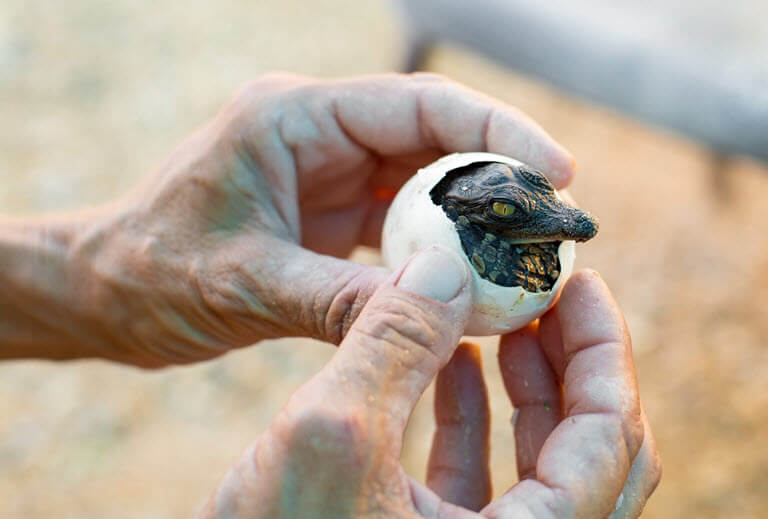 A dead crocodile could signify a stagnant relationship. However, you can’t face that idea in your waking hours, so your subconscious brings it up in your dream disguised as a dead crocodile.

How you feel about the sight of the dead reptile would help you understand that relationship better.

For the layperson, crocodiles and alligators are practically the same thing. They are both vicious reptiles that attack first and ask questions later. So whether you dream of a crocodile or an alligator, the significance of the reptile in the dream is almost always the same.

But if you happen to be a biology student or you work with either or both reptiles, then dreaming about alligators will often mean something different from if you had a dream about a crocodile. And in that case, you have to ask yourself why you dreamt about that specific reptile and what it represented for you.

Maybe you like crocodiles and despise alligators or vice versa. Maybe you had an incident with an alligator that made you act cautious around them. Your personal feelings about the reptile in the dream would help you uncover the hidden meaning and significance of that dream.

Dream Of a Crocodile as a Pet

Crocodiles as pets is not such a far-fetched idea in real life. But when you have a pet crocodile in your dreams, that could tell you that you find your life boring and you’d want a more adventurous lifestyle.

It could also reflect by extension on your current employment or relationships. You’re not satisfied with one or more of them and you seek excitement and new experiences. 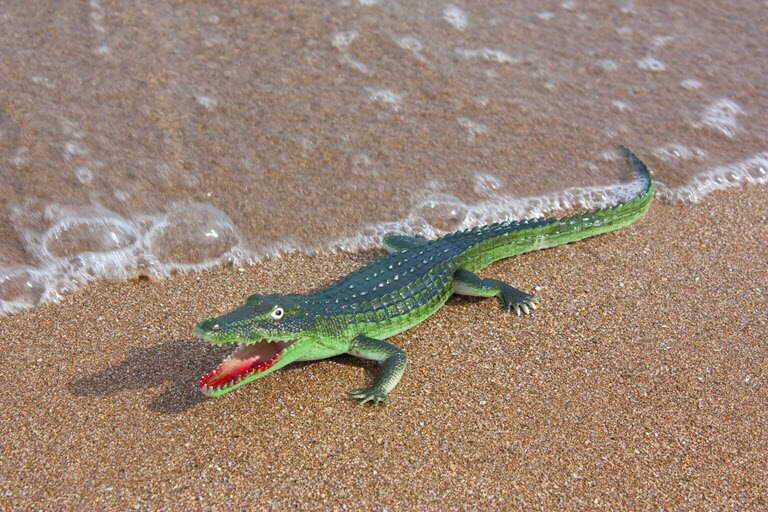 Spiritual Meaning of Crocodile in Dreams

If you’re a spiritual person, then having recurring dreams featuring crocodiles could signify important changes in your life. These changes could be related to work, social life, or your personal journey and spiritual progress.

We can sum up the significance of a crocodile dream as follows.

Biblical Meaning of Crocodile in Dreams

In the Bible, the crocodile was either mentioned by name (Leviticus 11:30) or referred to as Leviathan (Job 41: 1 and others). In every instance, the crocodile represented evil, threats of violence, and spiritual vulnerability.

Dreaming about crocodiles from a biblical sense can mean one or more of the following.

Is it Good to See a Crocodile in a Dream?

Whether it’s good or bad to see a crocodile in a dream depends on the context and how you feel about the reptile in the dream.

If you were afraid, anxious, panicking, or running for your life from the crocodile, then this was a bad dream and your subconscious is trying to tell you to take a closer look at your life and relationships.

If, on the other hand, you were comfortable around the reptile in the dream, you had the upper hand, or you were the one finishing them off, then you are well-adjusted, brimming with confidence, and you’re comfortable about where you are at this stage in your life.

It’s not uncommon to see a crocodile in your dreams. The colors, the ambiance, as well as the actual narrative of the dream, can tell you a lot about your daily life, struggles, and fears.

The crocodile dream can be your subconscious’s way of expressing anxieties about real events or people in your life. 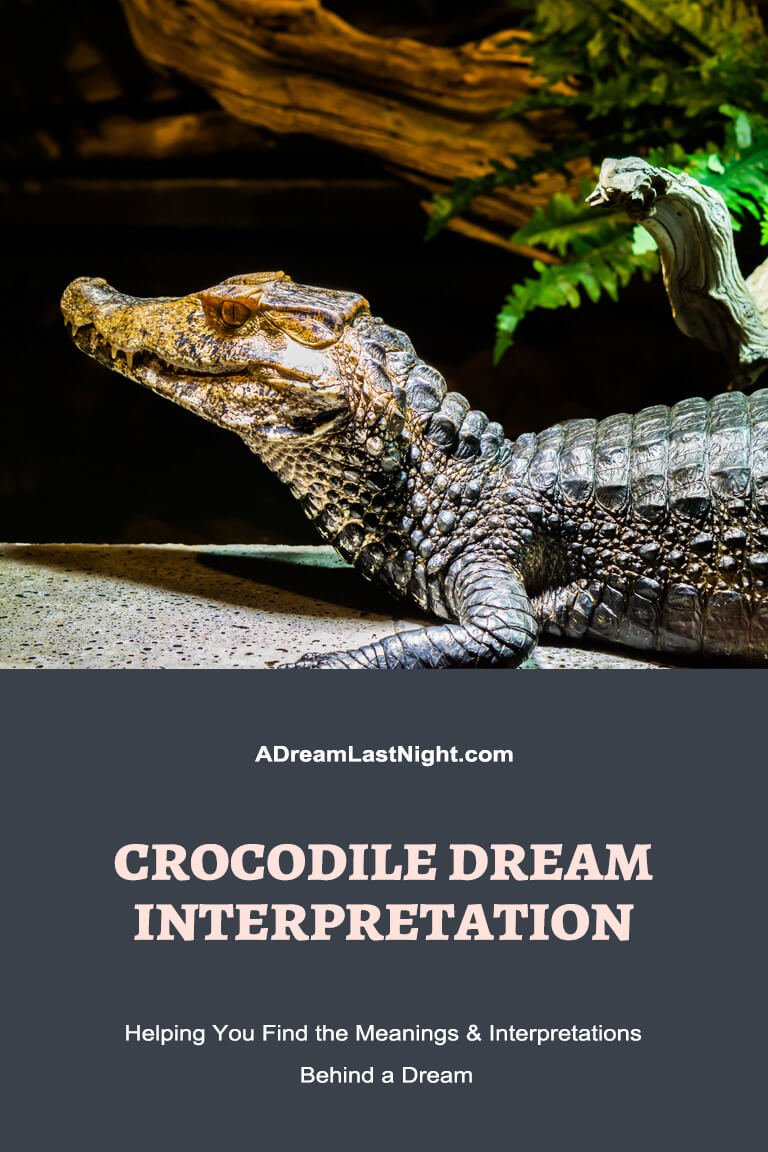